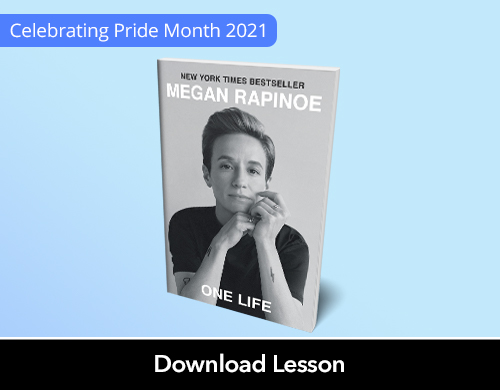 Megan Rapinoe is a well-known women’s soccer player who has helped the U.S. women’s team win two World Cups, won an Olympic gold medal, and constantly uses her platform to advocate for equality. Rapinoe also identifies as a lesbian and is currently engaged to WNBA player Sue Bird. Can you say “power couple?”

Throughout her 2020 memoir, One Life, Rapinoe talks about how she makes decisions and puts them into a simple three-question process.

“I don’t really do risk assessment, at least not in the traditional sense. If I’m thinking of doing or saying something that might potentially cause trouble, I don’t base my decision on how it might land. Instead, the three questions I ask myself are: (a) Do I believe in what I’m saying? (b) Do I know that what I’m saying is right? And (c) Does it need to be said as a matter of urgency? If the answer to all three is yes, I don’t have anything else to decide” (Rapinoe 89).

She goes on to say that the 2010 campaign for marriage equality informed her enough to come out in 2011 on the platform of the World Cup in Germany. After the fuss of the World Cup calmed down, Rapinoe scheduled an interview with Out magazine to officially come out as a lesbian. Many loved ones questioned if she was sure she was doing the right thing, but with her decision-making process set in stone, she told them she was absolutely sure.

“Coming out was bigger, more important and more integral to who I was than anything that happened in sports…People are selfish. You know what people are thinking about rather than thinking about me? Themselves. No one really cares. And if they do care, whatever, I don’t care…I feel like sports in general are still homophobic, in the sense that not a lot of people are out…People want—they need—to see that there are people like me playing soccer for the good ol’ U.S. of A.” (Rapinoe 100–101).

Megan Rapinoe was the first of many queer athletes to come out. She remains a leader in advocacy with equal pay among the men’s and women’s soccer league, the Black Lives Matter movement, and LGBTQ+ issues. She consistently shows us that representation matters—her coming out was important not only for her to be herself, but also for people to see a gay woman having fun and finding success in what she did.

Download the lesson below to guide you through a classroom activity around influential queer people and class discussion questions about standing up for your beliefs like Megan.

Jennifer Dryden is a high school English and journalism teacher in Des Moines, Iowa. She is a part of the LGBTQ+ community and advocates for queer youth any way she can, including running her school’s Gender Sexuality Alliance (GSA). She has a passion for reading and making lame jokes to her students just to see them laugh or roll their eyes. She just concluded her eighth year teaching. Dryden graduated from Iowa State University with a BS in journalism and mass communication (2010) and BA in English Education (2013). She attended New York University’s Summer Publishing Institute (2010), and spent some time in children’s book publishing in New York.