Mini Lesson: Patron Saints of Nothing 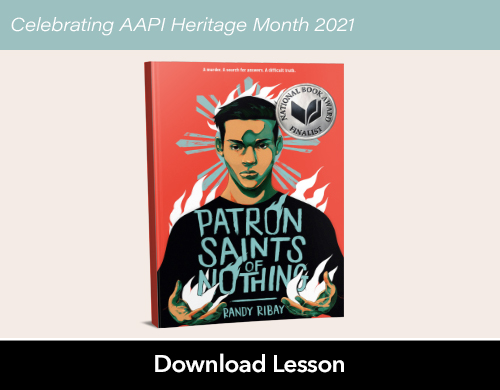 The following is an excerpt from Patron Saints of Nothing, by Randy Ribay. In the novel, Jay Reguero is set to graduate in a few months and then begin school at the University of Michigan, but against his father’s suggestion, he travels to the Philippines to get answers about his cousin who was murdered in President Duterte’s war on drugs.

The excerpt below can be found on pages 121-123 of Patron Saints of Nothing.

“College isn’t for everyone,” she says like she means it, not in the judgmental way people back in the States say it.

Mia leads us over to a different tank where the jellyfish have red, velvety bells and long tentacles that trail like shimmering threads.

“What about you? Are you studying somewhere?” I ask.

I don’t want to ask her what she’s studying. It’s such a boring line of conversation, and I don’t want to come off as boring. But I want to keep talking to her and it’s the only thing I can think of so I go ahead and ask.

I raise an eyebrow. “Really?”

“Is that…safe?” I ask, thinking of all the articles I’ve been reading about the drug war, about the consequences to those who criticize it, or even shed light on it.

“Have you heard of the Maguindano Massacre?”

I shake my head.

“It happened in Mindanao. A few hours away from where my mother is from. Where I was born and lived until I was almost twelve.”

She pauses, I wait for her to go on.

“A large group of people were on their way to file candidacy papers for a man who was going to run for office. Many were family members or supporters of the filing candidate, but most—thirty-two of the fifty-eight were simply reporters. Thugs hired by his opponent intercepted and then killed them…all of them.”

She nods. “Some say it was the deadliest attack on journalism in the world.”

“That happen in, like, the sixties or seventies or something?”

I fall quiet trying to reconcile the violent vision of that relatively recent event with the mundane middle-class fantasy of this mall, with the international stereotype of Filipinos as friendly and subservient.

“Let me guess: That’s the kind of reporting you want to do?”

“Of course,” she says with conviction.

Michael M. Guevara, recipient of a 2019 Book Love Foundation Grant, spends his days advocating for choice reading and authentic literacy instruction. An Academic Trainer in a large urban high school in San Antonio, Texas, Michael works with teachers on improving their literacy instruction and uses choice reading to help students achieve academic success. A former K-12 ELAR coordinator, Michael has served as president of The Texas Council of Teachers of English Language Arts and an NCTE committee chair. He recently served on the Texas state standards revision committee that developed new literacy standards adopted by Texas in 2017. His workshops with teachers focus on mentor texts and authentic student writing from their choice reading. Michael is working on a professional development book for literacy educators and currently has agents reading the manuscript of his young adult novel The Closest Thing to a Normal Life.